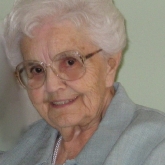 Remembering the Life and Legacy of Jeanne A. Cote, February 6th, 1918 to June 4th, 2011. It is with a heavy heart that we share the news of the passing of Jeanne Cote, the wife of Louis P. Cote and our mother, on June 4th, at the age of 93. Mother of seven, Grandmother of eighteen and Great-grandmother of nineteen, this remarkable woman was largely responsible for keeping this company going after the death of Louis P. Cote in 1964 until John & Donald took the reigns. The story of that part of her life is reprinted here from an article that appeared in 2009.

“In 1965 when our father & company founder Louis P. Cote passed away many things could have happened to this company. But his wife, our mom, Jeanne Cote assumed ownership and kept a handle on the business while it was run by several different people for the next few years. Jeanne worked in the office & dealt with the financial aspects of the business. She became the “Chief cook and bottle washer”. On weekends or after hours she could often be found cleaning the offices & washing the floors. If a salesman came looking for the owner on the weekend she’d tell him she was just the cleaning lady. I’d like to have seen their face when they came back Monday morning to find the cleaning lady in the boss’s chair! She kept everything going until John & Don were out of college and they were able to take charge of the company in the late 1960’s and early 1970’s. She continued working at “The Shop”, as our family has always called it,until the late 1970’s “

At 93 we no longer made her ride in every new truck we got, but she was still there with encouragement for us and of course the world’s best chocolate chip cookies. For everything she has done and given us, we thank her!

Her Obituary may be found here.