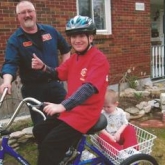 On April 5th Corey Sliwerski,  a 13 year old with special needs, was devastated to discover that his bike had been stolen from his home in Manchester.  And this wasn’t just any bike as his father John Sliwerski, a long-time Louis P. Cote employee told us.  John’s son has a rare chromosome imbalance and the bike was a specially designed three wheel bike.  It took Corey two years and lots of practice to master riding the bike that he loved.

Upon hearing the news John’s co-workers here at L. P. Cote took up a collection and the company picked up the balance. A new bike, complete with cargo basket and all the trimmings, was ordered the following day.

About a week later the Manchester police did find Corey’s bike but it had been stripped, vandalized  and the serial number mostly removed.  Then, on Monday April 18th, a brand new bike arrived and was enthusiastically received by Corey with an ear to ear smile.  We wish him a safe, fun-filled summer on his new bike!